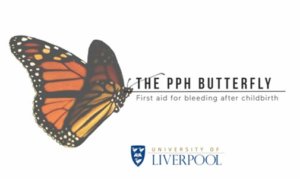 The PPH Butterfly: first aid for bleeding after childbirth

A new device developed by doctors from Liverpool could help thousands of women who experience severe bleeding after childbirth.

Each year around 50,000 women worldwide die from a postpartum haemorrhage (PPH) – around one every ten minutes.

In England and Wales, greater access to drugs and immediate medical care means the impacts are usually less severe, but one in 20 women will experience one – and may need a blood transfusion or surgery as a result.

Traditionally, PPH is treated with an injection of drugs designed to help the womb contract, but sometimes women do not respond to this and the only option is for a doctor or midwife to manually massage the uterus using their hand.

The new device, called the PPH Butterfly because of its folding ‘wing’ design, is designed to be smaller and more comfortable for women, and can also help medical staff to better identify and treat the source of the bleeding.

In a year-long trial, funded by the National Institute for Health Research (NIHR), the nation’s largest funder of health and care research, the device was used on 57 Liverpool women who suffered a PPH and results showed it had a significant impact on their bleeding. The full results of the trial will be released in the summer.

Consultant obstetrician Professor Andrew Weeks, Director of the Sanyu Research Unit in Liverpool, who led the trial, said: “Postpartum haemorrhages can be very traumatic for new mothers, who just want to be able to spend time with their babies.

“They are usually caused when the womb doesn’t contract back in the way it should after the birth. Drugs can be a very effective way of treating them but for some women this doesn’t always work – or in low-income countries the drugs may not be available – and manual compression of the uterus is needed. This is a very uncomfortable process for the woman and also very tiring for health professionals meaning that it cannot be sustained for long.

“The PPH Butterfly has been designed to do the same job but is smaller than your average hand or fist and requires less physical force from the clinician.”

Emma Hayden, Public and Patient Involvement Representative on the trial said: “This study is so important from the perspective of the patient as the PPH Butterfly has the potential to considerably improve the woman’s treatment experience and outcomes.

For instance, it looks very promising that the Butterfly could be an intervention used to help save lives in low resource settings.”

“In countries such as the UK, the device could provide a significantly less painful and traumatic intervention to bimanual compression for the woman, helping control bleeding and aiding diagnosis of the source of the bleed.

I feel very passionately about the potential of the device having both experienced a major PPH myself, and the use of bimanual compression to help manage it.”

“Hopefully using the device could mean that the patient would be less likely to require blood transfusions post birth and longer stays in hospital, and the possible emotional impact of a PPH could be reduced.

“The new mother would be more able to concentrate on bonding with their baby and enjoying motherhood, and there are even promising results on establishing breastfeeding in the trial group too.”

The plastic device, which has been developed after extensive consultation with healthcare professionals and a patient focus group, is inserted into the birth canal and provides a platform against which the uterus can be squeezed to stem the bleeding. Its mesh-like surface allows blood to drain through while the compression is taking place and gives health professionals a better view of where the bleeding may be coming from.

The PPH Butterfly has been developed by the Sanyu Research Unit at Liverpool Women’s Hospital, in conjunction with a design team at Royal Liverpool and Broadgreen University Hospitals, qualitative research experts from the University of Manchester and health economists from Bangor University. The trial was funded by the National Institute for Health Research (NIHR)’s Invention for Innovation (i4i) programme and is sponsored by the University of Liverpool.

The device itself was developed alongside Plasdistribution, a global manufacturing company with its UK head office in Shropshire.